Back then it was only dreaming and imagining since he wasn’t even born and now he is still too young to know, of course… however, even back then there was this feeling that our little boy was going to be a leader. A boy who brought joy and God’s grace wherever he went. A literal life of the party packaged in our little boy.

I know it’s still too soon to know exactly who he’ll be one day and he will be growing and changing for a long time. But the little boy that he already is has been spot on with our initial feelings. He was such an easy baby who has grown into a happy little boy who has SO MUCH energy. This boy constantly wants to play and lead the way and sing and laugh and run and discover new things and giggle and be goofy and basically – there is never a quiet moment unless he’s knocked out hard in his crib sleeping just as deeply as his Momma and Dada do.

The other day I had a little glimpse into the life of my future adventure child and it was just the joy I needed in my day. We were out front with the garage open and Jude was playing with his chalk while I broke down some empty moving boxes. In truth, what I wanted him to do was to play with his chalk, but really what he kept doing was walking halfway down the driveway while calling for me to follow him.

He kept pointing down the street and holding his hand out for me while calling “Momma” as if to say, “Come on, Momma! Follow me! I want to show you something!”

Meanwhile I kept holding back because I was on a mission to complete an item on my to do list for the week.

But this little boy is persistent and finally I could see he wasn’t going to give up so I grabbed my keys and shut the garage door and took his hand.

And he took me on an adventure.

Down our street and past all of the homes we walked hand in hand and while I was pretty sure I was going to end up carrying him back up the little incline to our house, I just couldn’t deny Jude the happiness that was on his face. He wanted a walk and I love him so I had to give it to him. I’m a sucker for this kid.

He took us on a different route than we’ve walked or driven before and within five minutes of Jude pace walking we came to a clearing past some homes that opened up right into Lake Louise and a trail that winds around the edge of the water. 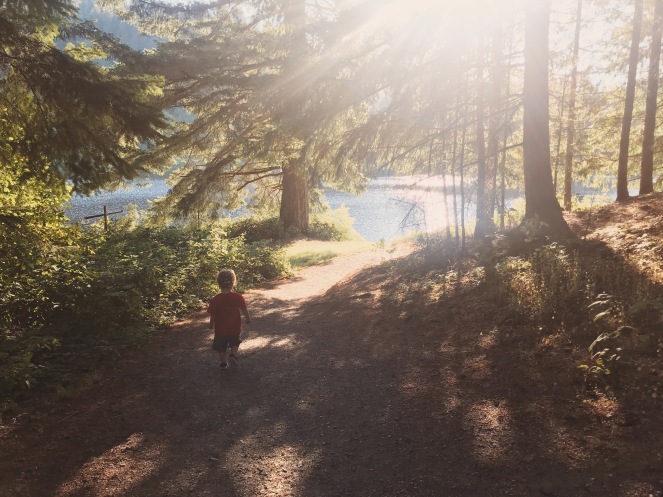 I had no idea that we could access the trail from this close to our house but somehow Jude just knew. It was like he had been there before. We walked hand in hand for most of the trail – which he NEVER lets me do – and with the beautiful early evening sun shining on us we had a little adventure finding ducks, dogs, and sticks at all the edges of the water.

Yes- I did have to carry him the last five minutes of our walk back home just like I had predicted earlier and yes I was just a day away from being officially 37 weeks pregnant. But you know what?! It didn’t matter one bit to me. Because without even knowing it, this little love of mine had given me exactly what I needed: a good walk in the sunshine around our new neighborhood being silly together.

And more importantly, I got to watch his eyes light up with joy as we adventured and that is just too magical to ever pass up.